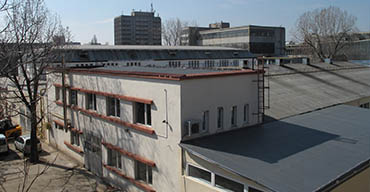 BRANTO’s adventure starts back in 1991, when two engineers, Viorel and Iulian Bratu, together with their father, all of them fond of technology, laid the foundation of a new company in their own small backyard. It was a difficult start but their ambition and hard work paid off. A 35 square meters workshop was set up with minimum equipment allowing them to launch their activity.

Within a few months and drawing on limited financial resources, an original design machine had been built for the manufacturing of profiles from metal sheets, in different shapes and sizes. At that time, the production output was of approximately 1000 meters of profiles per day. The profits had been used to acquire their first metal cutting machines, which allowed them to produce more complex parts.

From the very beginning the founders of the company believed that exporting would help the company gain faster recognition and support their access to a market with higher potential and therefore, in 1995, Branto started their collaboration with the German company Schneider Fahrzeug & Containertechnik GmbH producing assemblies for trailers and for various agricultural machinery.

New equipment was gradually acquired and the small workshop was no longer sufficiently large to accommodate the activity. In 1996 the company relocated to a 200 square meters production facility they had rented. The company continued to acquire equipment and diversify their production leading to a necessary space toward 1000 square meters. This is when the company had the opportunity to take their activity to the next level and Branto started a tight collaboration with the U.S. company WH Industries Inc. initiating the production and export of rocker arms shafts for Diesel engines to the American market. All this required a strict quality management system and in 2003, in order to meet customer demand and ensure a high-performance and tightly controlled manufacturing process, BRANTO obtained the ISO 9001 Certification. In the beginning the company produced rocker arm shafts for the after-market and, a few years later, for the OEM market. Ever since, millions of rocker arms shafts have been produced and are now used in engines manufactured by Caterpillar, Navistar, Volvo, Perkins, Deutz , Daimler, MTU, etc.

In 2009, the company was audited by the United States Customs and Border Protection Agency within the CTPAT program so as to secure a faster transit of their goods through the US customs.

Another important step in the development of the company was taken in 2005 with the acquisition of additional premises, the company dedicating 4500 square meters to its production activity and reaching its current surface. The number of employees also increased to nearly 70 people.

The company’s commitment to a clean production process in compliance with the environmental requirements led to the awarding of the environment permit in 2005 and the ISO 14001 Certification in 2018.

The acquisition of high-performance, flexible equipment capable of meeting customers’ strictest requirements has been and will remain one of the core objectives of the company. At the same time, the experience of two generations has made it possible for the company to design and build original machines and equipment, increasing the company success in a strongly competitive market. The older equipment has been refurbished so as to deliver the same performance as the latest one. As the extension of our pool of customers has become a necessity, we have gradually become suppliers for Makita, MTU/Rolls–Royce, Bosch, among others.

After 30 years of activity as manufacturers and exporters, our flagship products are still the rocker arm shafts. We can also manufacture new highly technical parts for other industries like medical, aeronautic, hydraulic, etc. During all these years, we have gained expertise and know-how that can be successfully used for the benefit of our current and future customers. We hope to continue building this beautiful story together.